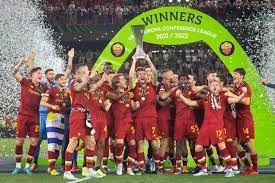 May 26 – Jose Mourinho does not do defeat in European club finals. His AS Roma triumphed 1-0 against Feyenoord with a defensive masterclass to claim the inaugural Conference League.

Nicolo Zaniolo’s first-half strike was enough to make it five trophies from five European finals contested by Jose Mourinho sides and hand Roma a first continental title in decades. Roma’s boy wonder chested down a cross before poking the ball past Dutch goalkeeper Justin Bijlow in the 32nd minute.

Mourinho had fielded an attacking line-up that included both Zaniolo and Henrikh Mkhitaryan, whose match fitness still proved inadequate as he limped off early on. Zaniolo’s goal allowed the Italians to play their favourite street-smart, defensive game.

“Winning is very difficult,” said Mourinho.  “You need many ingredients. Our team has played 55 games. We reached the final being tired, but we kept it hidden. This is a fantastic group of players; that makes me emotional. We struggled in the second half; our opponents played well and they forced us to make defensive changes.”

Feyenoord had never lost a European club final themselves but fell short after a combative second half. They pressed and pushed forward but the Dutch lacked precision and sharpness in and around the box. Cyriel Dessers, who scored ten goals en route to the final, never got the better of Chris Smalling, the rock in the solid Roman defence, buttressed by goalkeeper Rui Patricio. Feyenoord hit the woodwork twice, but it wasn’t quite enough to find an equaliser.

“I told the players during the break what they had to do better,” said Feyenoord coach Arne Slot. “In the second half, we were sharp from the first moment, but you need a bit of luck and we didn’t get it. We had the time and opportunity to score and we didn’t. Maybe that’s to do with the quality of the opponent.”

At the full-time whistle, Mourinho lifted five fingers in the air to remind everyone that this was his fifth victory European club final.

Roma’s win ensures the club a spot in next season’s Europa League.