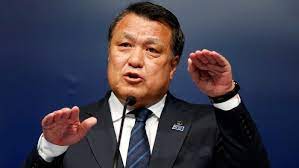 May 29 – Japan are keen to host the 2023 Asian Cup, the president of the Japanese Football Association (JFA) Kozo Tashima confirmed to Insideworldfootball. China withdrew from staging the continental championship because of the Covid-19 crisis.

“It’s one year before the tournament, so it’s not easy to host 24 teams,” Tashima told Insideworldfootball on the sidelines of the Champions League final in the French capital.

“We now discuss the AFC requirements in our federation. With just one year, we [would] have a lot of things to do. It would be an honour to stage the Asian Cup in Japan.  Soon, we would like the organize a big tournament.”

“The status of the Asian Cup is very high. You can’t have terrible organisation. That is why we need a little bit more time. We have discussed it with Sheikh Salman. We have to choose the best option for Asia.”

Tashima (pictured) said that he didn’t quite understand why China had withdrawn from staging the Asian Cup because Beijing had hosted the Winter Olympics, but he said that unity is key as the AFC is left scrambling to find hosts for its flagship 24-team tournament. Qatar, Saudi Arabia, India and Iran are bidding for the 2027 finals. Qatar has the infrastructure to stage the Asian Cup at short notice, while Saudi Arabia is in the process of completing and upgrading facilities.

“It’s an emergency now,” said Tashima, discarding the notion that staging two consecutive championships in the Western zone would cause friction. “One year before the tournament, China cancelled. I don’t know why. We have to unite in solitary with Salman.”

Tashima also left the door open to stage future Club World Cups, even in an expanded 24-team format if plans for the expansion ever materialize. Japan have staged eight Club World Cups in total but they had to withdraw from hosting the 2021 Club World Cup because of the global health crisis.

“We have invested so many times in it,” said Tashima. “Gianni [Infantino] decided for 24 teams. With 24 teams it is a more suitable Club World Cup. It is not easy to schedule. China wanted to host it, but we don’t know the current status of the Club World Cup. We have a lot of interest.”