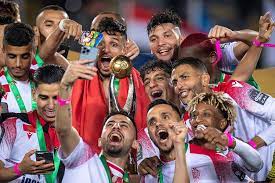 May 31 – Morocco’s Wydad Casablanca dethroned Egypt’s Al Ahly as kings of African football with a 2-0 win in the final of the continent’s Champions League.

Zouheir El Moutaraji got both goals for the Moroccans, ending Al Ahly’s dream of claiming a third consecutive Champions League title. For the Moroccans, it was their third victory in the competition after they triumphed in 1992 and 2017 as well.

El Moutaraji opened the score with a spectacular strike in the 15th minute and he added a second after the break to clinch the win for Wydad, who played in front of the partisan crowd. Supporters had filled the stadium hours before kickoff, but the final passed without major incidents.

However, Pitso Mosimane, the Al Ahly coach, still voiced his dismay over the home advantage for the Moroccans.

“I do not know how anyone can say that the CAF Champions League final was well organised. I think the Moroccans are the only ones who said that,” said Al Ahly coach Mosimane, reiterating the criticism that the Confederation of African Football (CAF) had effectively handed Wydad home advantage by staging the final in Casablanca and not at a neutral venue.

“The better team was the one who lost tonight. When you play in a neutral ground and with equal fan attendance from both sides then you can speak about winning or losing. I think everyone who took this decision is happy now.”

CAF has always defended its decision to stage the final in Morocco, saying that other bids had withdrawn.