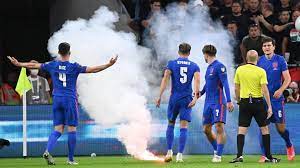 June 1 – England’s game against Hungary in Budapest on Saturday, which was scheduled to be played behind closed doors, will now have a crowd in excess of 30,000, according to UK media reports.

A three-match spectator ban was issued by UEFA in June 2021 as punishment for racist abuse from Hungarian fans during Euro 2020.

While Hungary was waiting to serve that ban, they were handed a separate two-game ban by FIFA, after further racist abuse was directed towards England’s players when the two teams met in a World Cup Qualifier in September.

But a loophole in UEFA’s rules allows for children to attend a closed game such as this, with every 10 children allowed to be accompanied by one adult.

National associations are permitted to distribute tickets to local schools and grassroots football clubs for international games for children aged 14 and under.