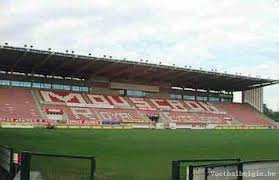 June 1 – Mouscron has filed for bankruptcy, bringing to an end last-minute rescue attempts by the club and the city to find a new investor.

The Belgian Court of Arbitration for Sport (BAS) condemned the club to the amateur divisions in May when it rejected Mouscron’s appeal to be granted a pro license. The club reportedly laboured under debts of €4 million and filed for bankruptcy earlier this week.

In the past decade, the Walloon club lurched from one disaster to the next week, with shady ownership structures and financial mismanagement. Gold Football, Malta Latimer ltd and Bongo Co owned Mouscron before Gerard Lopez, who owned Lille, stepped in to form a partnership with the French club.  Mouscron nurtured unsavoury links with Israeli agent Pini Zahavi.

When Lille ended the partnership, Mouscron’s troubles deepened. For the seventh time in eight years, the club were refused a pro license and this time the legal route via the BAS didn’t bring reprieve.

Founded in 1921, the club enjoyed its best spell under coach George Leekens in the late 90s and later went on to reach the Belgian Cup final.