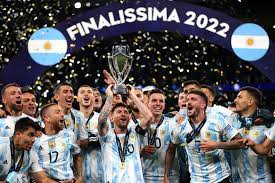 June 7 – The winners of this summer’s Women’s Euro 2022 in England will face the winners of July’s Copa America Femenina in Colombia in a women’s Finalissima.

The match will be played in Europe but the date and venue have yet to be decided.

The inaugural men’s Finalissima was played between Italy and Argentina – Argentina won 3-0 with a masterclass being provided by Lionel Messi – in front of a packed Wembley stadium last week, prompting UEFA to announce a women’s version.

The Netherland are the current European champions while Germany are the most successful European women’s nation with eight Euros titles.

Brazil have won the last two Copa America Femenina championships and seven of the last eight times the finals have been held. Argentina being the only other winner in 2006.