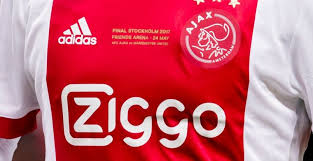 June 8 – Ajax shirt sponsor Ziggo, who at the end of last year extended its sponsorship for a further two years, have expanded the deal to include its GigaNet fibre-optic cable network as the back-of-shirt sponsor.

The GigaNet logo will be placed under the shirt number from the start of the new season.

Edwin van der Sar, general manager of Ajax, said: “Thanks in part to the growth of the main sponsorship, we can further strengthen our financial position, something that is necessary to be able to continue to pursue our sporting ambition – structural affiliation with the European elite.”

Ziggo, who have been a main sponsor of Ajax since 2015, is the largest cable operator in the Netherlands, providing digital cable television, Internet, and telephone service. The company is part of the Vodafone group.

The deal with Ajax and Ziggo will see a focus on providing exclusive Ajax content on Ziggo Sport, marketed via providing benefits for fans.

No value was given for the sponsorship that reportedly opened at €8.5 million a year in 2015.

Last November Marcel de Groot, VodafoneZiggo consumer market director: “We are proud of the extension of our main sponsorship and see that the appeal of Ajax is only increasing. Ajax will therefore play a major role in our new customer program Priority, alongside other partners such as Ziggo Dome and MOJO We are very much looking forward to letting our customers experience the magic of Ajax, on an even bigger and better scale than before.”