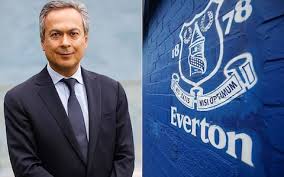 June 9 – Everton owner Farhad Moshiri has reiterated his commitment to the club and the building of its new stadium at Bramley Moore Dock.

In an open letter to fans he apologised for the underperformance of the club on the pitch last season in what he said “proved to be a very challenging campaign”.

“Mistakes have been made and for that I want to apologise to all of you. It has not been good enough and we need to do better,” he said.

Off the pitch the club is engineering a move from its Goodison Park stadium to a new stadium in Bramley Moore Dock, but has been caught up in financing issues.

Moshiri said: “I am committed to securing the future success of the Club by delivering a fully-funded stadium that will underpin our status as a leading club. Our new stadium project at Bramley-Moore Dock has reached an exciting and landmark stage as it emerges from the ground, with the four main cores now in place.”

The new 52,888-capacity stadium on Liverpool’s waterfront is expected to cost about £500 million, though that looks likely to rise with increasing costs of building materials in the UK.

Concerns over Moshiri’s finance have arisen because of his close links to Russian oligarch Alisher Usmanov who was a shareholder with Moshiri at Arsenal. Usmanov’s company USM is the naming rights sponsors of Everton’s Finch Farm training ground while other Usmanov companies -Megafon and Yota – were substantial club sponsors.

When Russia began its invasion of Ukraine Everton severed sponsorship ties with the Russian companies, instead issuing a statement supporting their Ukraine international Vitalii Mykolenko.

“The Club has already made an important contribution to the Disaster Emergency Committee’s Ukraine Humanitarian Appeal and I can confirm that we have offered a friendly match at Goodison Park to Dynamo Kyiv to raise additional funds to support the Ukrainians,” said Moshiri in his letter to fans.

Everton have spent more than £500 million in the transfer market in recent seasons and rather than pledge more money to bringing in new players, Moshiri emphasised the appointments of Frank Lampard and new coaching staff as key to the future of the club.

“During the 2021/22 season, the Board led a strategic review of our operations which included looking at working practices, our recruitment process and the whole structure of our footballing operation in order to clearly identify the causes of our under-delivery on the pitch. Many of the learnings have already been implemented,” said Moshiri.