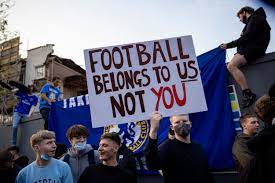 June 14 – The all-important hearing into whether football’s governing bodies had the legal right to sanction the much-maligned European Super League clubs will take place on July 11 and 12, potentially shaping the future of the game for years to come.

The European Court of Justice will hear a challenge against rules which, it is claimed, unfairly restricted Europe’s wealthiest clubs from setting up a rival competition to UEFA’s established tournaments.

The European Super League company filed a lawsuit against both UEFA and FIFA at a Madrid court which then moved the case on to the Luxembourg-based ECJ.

The three remaining super league backers (the rest withdrew before the concept even off the ground)  are seeking a judgement that UEFA, by blocking the project, acted beyond its powers and is guilty of creating a monopoly.

In April 2021, 12 clubs announced the formation of a Super League but the plan collapsed within days following a massive backlash from fans, leagues and federations.

An ECJ verdict would not come for several months but the importance of the hearing cannot be overstated. The challenge is highly significant since the ECJ is the same body that ruled on the Bosman affair back in the mid-1990s that changed the entire landscape of European football.

The fundamental question is whether the Super League is protected by EU legislation or not. In other words, is UEFA guilty of breaking European competition law?

Super League backers wrote to MEPs last November arguing that “there is no other market in the European Union in which a regulator would also be allowed to be the sole, dominant operator and gatekeeper.”

The Court will have to decide whether penalties against the Super League rebels for trying to create a competition outside of UEFA violate the free market in the territory of the EU.

The ECJ will have to consider, he further explained, whether the governing bodies “are conflating their role as regulator with their role as a commercial rights holder and exceeding their constitutional powers in shutting down the ESL.”