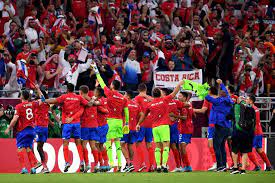 June 15 – Costa Rica claimed the last ticket for the 2022 World Cup at the expense of a brave New Zealand following a third-minute Joel Campbell goal in a 1-0 victory.

They had most of the possession and most of the opportunities. They even had the ball in the back of the net after an instinctive, close-range finish from talismanic striker Chris Wood, but referee Abdulla Hassan Mohamed chalked off the goal for an infringement by Matthew Garbett.

The All Whites of New Zealand were confident and incisive, but football at the elite level is often fraught and unforgiving. Teams win and lose matches in the blink of an eye and Costa Rica have become experts in Concacaf at grinding wins out.

After just three minutes, veteran striker Campbell, once of Arsenal, timed his run to perfection to connect with a low cross from teenager Jewison Benette and tuck the ball home, 1-0. It was Costa Rica’s first and last attack of the first half. The Ticos had their dream start. They were 87 minutes away from clinching the last World Cup ticket.

New Zealand remained composed, exploiting hesitation in the Costa Rican defense to generate danger and a flurry of chances after fifteen minutes. With the goalmouth at his mercy, Alex Grieve should have done better. In the 36th minute, New Zealand claimed a penalty for a push on Wood, but the referee would not have it.

At half-time, Costa Rica rang the changes, bringing on Kendall Waston, 34, and Bryan Ruiz, 36, as well as Carlos Martinez. The Ticos are an aging squad, but they finished the Concacaf qualifiers with 19 points from their last seven matches to pip Panama to fourth place.

The veterans showed their experience and game management after the break. Tenacious, Ruiz provided some forward impetus. Space was opening up for Costa Rica as New Zealand went in search of an equaliser.

That leveller never arrived. Instead, Kosta Barbarouses was sent off for a poor lunge, taking out the ankle of Calvo. This time New Zealand could complain little, but with 22 minutes to go, the All Whites were chasing the game, a goal and a man down. It was hard on New Zealand, a young and tight-knit group that has taken big strides under coach Danny Hay. They kept fighting, rendering the numerical disadvantage irrelevant, but after playing one of their best matches yet, they were left empty-handed.

“The performance was phenomenal,” said Hay, admitting his team lacked the finishing touch. “It was obviously such a disappointing goal to concede, but the response after that was incredible from the players. We totally dominated the match. We were sensational. Even with ten men, we are dominating a team that is now going to the World Cup. The manner of the goal we conceded is going to hurt for a long time.”

As chants of ‘Ticos’ rang around the stadium, Costa Rica became the 32nd and last World Cup finalist, slotting into Group E alongside Spain, Germany and Japan. In their opening game on November 23, the Costa Ricans will play Spain, two days after Senegal and the Netherlands kick off the tournament.