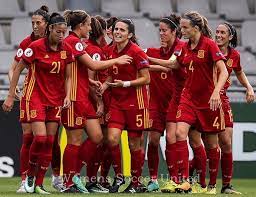 June 15 – In the build-up to the Women’s Euro 2022, the Spanish FA (RFEF) have announced that the men’s and women’s national teams will receive the same percentage of the prize money distributed by UEFA and FIFA at major finals.

The five-year agreement with the women’s team that will cover the next two European Championships and two World Cups, as well as the 2024 Olympic Games, will also include a regularisation of the image rights and improve the team’s working conditions.

“It’s historic,” said Futpro lawyer Amanda Gutiérrez.  “We speak of nothing more and nothing less than equality and sharing conditions with our colleagues.”

“It is important to clarify that the federation does not pay salaries or allowances,” explained RFEF president Luis Rubiales.

“Bonuses and bonuses advances will be paid. All the players will have a percentage of the sponsorships that arrive from now on. The distribution that is made of this percentage is already up to them.”

The negotiations between the RFEF and the women’s team got underway last year and for the first time, representatives of Futpro advised the team.

The German FA announced that players will receive a record performance-related bonus of €60,000 if they win the Women’s Euro 2022 following an agreement between the German FA (DFB) and the team representatives.  UEFA has established the prize money for the 2022 Women’s Euro at €16 million. At last year’s men’s tournament, the prize money totalled €331 million.

“This reinforces the commitment of the RFEF with the players and the Spanish women’s national team,” said FC Barcelona player Irene Paredes.

“We want to be the best players, the best team and the best national team. We are going to England to give it our all.”