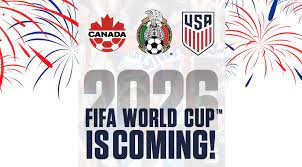 June 16 – World federation FIFA will announce the host cities for the 2026 World Cup today, Thursday, bringing to an end a four-year bidding war among 17 US finalists.

The global governing body sent a delegation led by chief competitions and events officer Colin Smith to inspect the bidding cities and their venues. The number of hotels, public transportation and whether the city is willing to commit public funding are among the decisive factors in FIFA’s criteria to award hosting rights.

The US cities in the running are New York, Dallas, Atlanta, Philadelphia/Washington DC, San Francisco, Houston, Seattle, Miami, Baltimore, Kansas City, Boston, Nashville, Denver, Orlando, Cincinnati and Los Angeles. With the Rose Bowl Stadium, the venue for the 1994 World Cup final between Brazil and Italy, and SoFi Stadium, the venue for the last Super Bowl, Los Angeles has two stadiums in competition.

Chicago, Minneapolis and Phoenix were some of the cities to drop out in March 2018 over what city officials called burdensome financial demands by FIFA, referring to FIFA’s infamous tax waiver requirement.

FIFA is expected to pick ten US cities to host the finals, with America staging 60 out of 80 matches. The global governing body has, at least theoretically, already selected the cities that will stage matches in Mexico and Canada, the first 48-team World Cup and the first finals to be hosted by three countries.

Guadalajara, Mexico City and Monterrey will serve as host cities in Mexico while Toronto, Edmonton and Vancouver should step in for Canada. Montreal dropped out of the running after Quebec’s government voiced concern over the financial impact of staging World Cup matches, while Vancouver came in at the last minute to bring the Canadian contingent up to three. Any change to these cities would be a major surprise.

Zurich awarded the 2026 World Cup to the US, Mexico and Canada at the 2018 FIFA Congress in Moscow when the tri-bid saw off competition from Morocco, the eternal contender from Africa.  The winning bid seduced the FIFA electorate – the Congress – with the promise of an $11 billion commercial outcome. The United bid and a return of World Cup hosting in the Concacaf was nevertheless hard to argue against on multiple criteria – not least the quality of the facilities available.