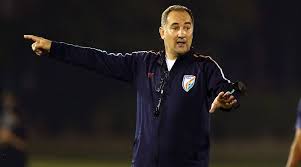 June 16 – Indian head coach Igor Stimac has told Indian football to “wake up”, criticising how the All India Football Federation (AIFF) is being run.

Earlier this week, India qualified for a second consecutive Asian Cup before thrashing Hong Kong in Kolkata 4-0. But Stimac, who played in the Premier League with West Ham and Derby, issued a strong warning over the future of the game in India after postponed elections and lawsuits have left the AIFF paralysed.

“You can hear things from the next months about changes,” said Stimac. “There will be things that will come out, there will be conditions for me to stay. Some things must change drastically and I don’t care who is on the opposite side.”

“Be it FSDL, AIFF or the government. Beware of the Indian national team. We represent India, if there are ambitions in the country to think about where we can be, they must follow our motto.

“I am not getting into who is right and who is wrong. It is not my job. I am just talking about timing. At such an important time, such a thing is happening, is anyone normal?”

In the last few weeks, longstanding AIFF president and FIFA Council member Praful Patel was sidelined following a decision by India’s Supreme Court to appoint a three-member Committee of Administrators (CoA) to manage the AIFF’s affairs and adopt a constitution in line with India’s National Sports Code. The CoA is also tasked with staging fresh elections.

Stimac arrived in India in 2019, tasked with the mission of ensuring qualification for the Blue Tigers for next year’s continental championship.  Between 1984 and 2011, India never qualified for the Asian Cup. Now, for the first time, the team has achieved back-to-back qualifications, suggesting the Indians have clearly benefitted from the tournament’s expansion to 24 teams.

The comments by the 54-year-old Croat left his own future in doubt. He wants to see major change but a federation leadership might not want to be held to ransom by a coach. His contract with the AIFF runs out in September.