June 17 – With a summer of confederation women’s championship about to begin – Concacaf, CAF and UEFA are all kicking off significantly expanded competitions in July – FIFA has released its biggest Women’s World Rankings to date with 181 nations included.

Conmebol and the OFC are also holding their final Women’s World Cup qualifiers for 2023.

The US women continue their run at the top of FIFA’s rankings, a position they have held since 2017. They are followed by Sweden and France. In 2017 Sweden also held second spot, with Germany ranked third. In 2022 Germany have dropped to fourth with France ranked third.

FIFA point out that despite 130 women’s international matches being played since March 2022, little has changed at the top of the ranking.

Below the top ranked nations there is movement and FIFA highlight the continued improvement of Slovenia (45th, +2) and Philippines (53rd, +1) who have both reached highest ever positions.

The highest climber in the ranking is St Kitts and Nevis who rose eight spots to 130th.

Looking at the top 20 shows a picture of the rapid growth of the women’s game in Europe, with the continent providing 13 of the top 21 ranked teams – North Korea are ranked 12th but this is a historical anomaly with the country not having played an international women’s match since 2019.

The AFC has five teams ranked in the top 21, Concacaf has two and Conmebol just one. 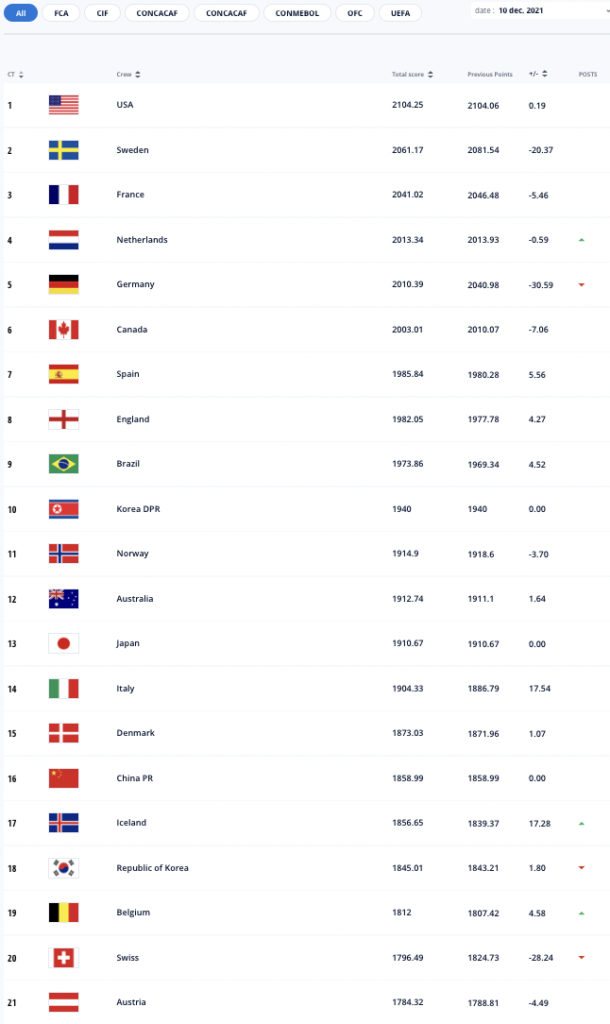