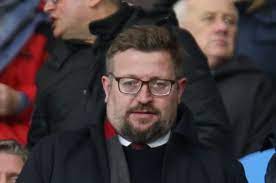 June 20 – Manchester United’s chief executive Richard Arnold took the unusual step of meeting with a group of disgruntled supporters in a local pub after hearing they had planned a protest outside his house.

United endured their worst Premier League campaign from a points perspective last season, finishing sixth with a tally of 58 with only 16 wins from their 38 games.

Fans had been planning to target Arnold, who replaced Ed Woodward earlier this year, amid continuing unrest about the ownership of the Glazer family so he headed off the demonstration by going to his local pub to meet the dozen or so activists.

He apparently asked that the contents of the conversation be kept private and not be filmed but footage of the meeting soon made its way onto social media including quoting him as describing the past year at the club as a “f…… nightmare”.

A new era is set to begin at Old Trafford following the appointment of Erik Ten Hag as manager and Arnold apparently discussed the transfer window and the pursuit of Barcelona midfielder Frenkie de Jong.

A spokesperson for Manchester United responded: “Richard heard that a group of fans had gathered in a pub near his house. He went to meet them, bought them all a drink, listened to their views, and explained what the club is doing to deliver success on the pitch, improve the stadium, and strengthen engagement with fans.”