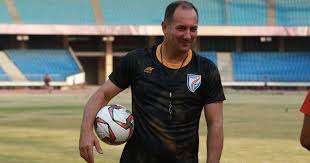 June 20 – India coach Igor Stimac has said that it’s imperative the All India Football Federation (AIFF) holds presidential elections soon after the sidelining of Praful Patel. The Croat also insisted football’s calendar should not depend on the cricket season.

At an impromptu press conference, Stimac, who led India to a consecutive qualification for the Asian Cup last week, urged the three-member Committee of Administrators running the AIFF following a Supreme Court decision to stage fresh elections as soon as possible. Patel’s mandate ran out in 2020, but new elections were avoided following a court injunction.

“I can’t get into this, why the elections were not held,” said Stimac. “Patel has his own reasons. We might have problems very soon if these elections are not held rather sooner than later. If we don’t start organising ourselves because this committee is not organizing what is needed for the national team and other teams. Time is passing by and we are not preparing ourselves for the upcoming work. That might be the problem. We need to start working yesterday, not tomorrow.”

Today (Monday), a FIFA-AFC delegation, including AFC secretary-general Windsor John, will touch down in India to meet with Patel, the COA, the sports minister and other stakeholders. A frank Stimac said those stakeholders need to plan a properly-structured domestic football season and longer national team camps.

Stimac, who arrived in India in 2019, has repeatedly demanded the domestic landscape be restructured, but that might well be wishful thinking. Last week, the media rights for cricket’s Indian Premier League (IPL) were marketed for more than $6 billion. The ISL rights are broadcaster Star Sports, which together with Reliance runs Football Sports Development Limited (FDSL), the commercial partner of the AIFF.  Star Sports also broadcasts the IPL.

“Things need to be sorted out about the football calendar, which is still being adjusted with regards to IPL and broadcasting…” said Stimac. “This needs to stop if we want to make football great in India. Football calendar should not depend on other things,” he says.

“India is blessed to have a sport as popular as cricket but shouldn’t be afraid to have another sport becoming as popular. And to do so, they need to open the door to football. Otherwise, it will not happen. Football shouldn’t suffer because of cricket.”

The Croat’s contact with the AIFF runs out in September and, while he would like to lead India at next year’s Asian Cup, his future remains up in the air.

“It is important to understand that the football calendar is different from the normal calendar,” said Stimac.

“Coaches are employed prior to pre-season; their employment happens in June, at latest July. So things need to be done earlier than he thinks,” he says. “I am very committed to AIFF. We finished three years of work, qualified for the Asian Cup and I would love to take this team and prove to everyone that India can do better.”