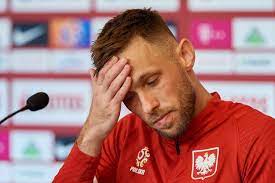 June 21 – A Polish international defender is being omitted from his country’s World Cup squad as punishment for joining Russian club Spartak Moscow.

Left-back Maciej Rybus (pictured), 32, has made 66 appearances for Poland and moved to Spartak on a free transfer on June 11.

Poland refused to play Russia in their scheduled World Cup play-off semi-final in March because of the invasion of Ukraine. As a result FIFA awarded Poland a bye into the next round, where they beat Sweden 2-0 to qualify for football’s showpiece tournament.

A statement from the Polish FA said: “The coach of the Polish national team, Czeslaw Michniewicz, talked to Maciej Rybus, who was currently staying in Poland, after the training camp of the national team ended last week.

“The coach informed the player that, due to his current club situation, he would not be called up for the September training camp of the national team and would not be taken into account for the team that would go to the World Cup in Qatar.”

Rybus previously played for Lokomotiv Moscow between 2017 and 2022 before taking the decision to move to their city rivals. There has been no word from the Polish FA on two other national players who have contracts with Russian clubs.

Midfielder Grzegorz Krychowiak of FC Krasnodar and Sebastian Szymanski are still covered by existing contracts signed before the invasion but Krychowiak has moved on loan to Greek club AEK Athens.