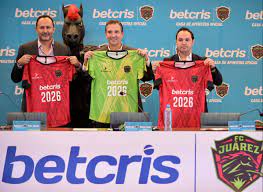 June 22 – Online bookmaker Betcris, based in Costa Rica, has added Mexican LigaMX side FC Juárez to its sponsorship roster in a four-year deal.

Betcris is already the official bookmaker for the Mexican National Soccer Team and Club Pachuca and is a sponsor of Atlante FC.

The bookmaker has been expanding its football sponsorships rapidly in Central and South America. In March it unveiled sponsorships covering nine League of Honduras clubs. Betcris was already title sponsor of the league.

Betcris also recently agreed new three-season deals with Brazilian clubs Ceará and Fortaleza. It is also the sponsor of the Ecuadorian national team.

“In sports, the FC Juárez board is working hard making important signings to make this team a protagonist in Liga MX. Betcris welcomes FC Juárez to their family and they look forward to continuing to grow together and achieving their goals both in sports and business,” said a Betcris statement.

No value was given for the FC Juárez sponsorship (the club is also known as Bravos de Juárez).