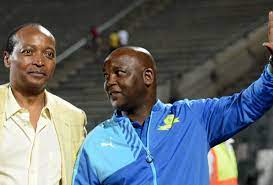 June 27 – Confederation of African Football (CAF) president Patrice Motsepe has suggested that the Motsepe Foundation could pay for Pitso Mosimane to become the new boss of Bafana Bafana.

Speaking at a South African National Editors’ Forum function, Motsepe (pictured left) said: “I wish Pitso Mosimane (pictured right) could coach Bafana Bafana. He is my favourite coach and I love him. He will always have a special place in my heart and I will even get the Motsepe Foundation to subsidise his salary. I think he is quality, and quality should not come cheap.”

Mosimane turned Mamelodi Sundowns, the club owned by the Motsepe family, into a domestic powerhouse.  The South African recently exited Egyptian giants Al Ahly after winning the Champions League twice with the club.

The role of Bafana Bafana coach is not vacant, but Hugo Broos is already under pressure to qualify South Africa for next year’s Africa Cup of Nations.

In 2021, Motsepe won the CAF presidency by acclamation. His son Thlopie Motsepe took over as Mamelodi Sundowns’ new chairman after his election.