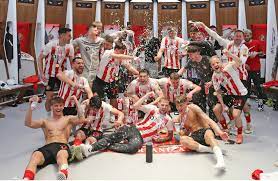 June 30 – Sunderland, better known these days for the club’s Netflix documentary than its football performances, has named betting firm Spreadex as its main shirt sponsor in a three-season deal ending in the summer of 2025.

Next season Sunderland will play in the Championship after winning the League 1 play off after a number of seasons in the English third tier. Sunderland were relegated from the Premier League in 2016 after a nine season spell in the top flight.

a number of seasons in league

The Spreadex Sports logo will be feature on the team’s home and away shirts with Spreadex CEO David MacKenziecommenting that the sponsorship was triggered by a more recent run of stroing results by Sunderland.

“At Spreadex, we have also seen strong recent results as we continue to grow as a company and we look forward to working closely with SAFC – and their fans and community partners – during this long-term deal,” said MacKenzie.

“One initiative we will be introducing immediately is a pledge to donate £100 to the Club’s designated charity for every home goal scored by the Black Cats throughout the upcoming season. We will also be looking to launch other charity initiatives in the coming months.”

Spreadex will also receive a package of LED perimeter board advertising, and presence across Sunderland’s digital media platforms.

SAFC’s Chief Operating Officer, Steve Davison, said: “We are all delighted to welcome Spreadex as our new Principal Partner and look forward to building our relationship with them throughout the next three years.”