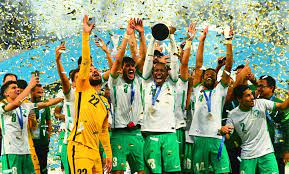 July 1 – The AFC is reporting record engagement across its social media channels for its just completed U23 Asian Cup in Uzbekistan, hitting a high of nearly 340 million impressions, a jump of 193.8% over the Thailand edition years ago.

Overall engagement on the AFC’s social media channels grew by 141.2% from 7.3 million in 2020 to 17.68 million in 2022 with the AFC highlighting the impact of its multi-lingual platforms in English, Arabic, Farsi, Japanese, Korean, Mandarin, Thai and Vietnamese.
Twitter generated the highest improvement in impressions with a 217% increase from 2020 to 33 million in Uzbekistan, followed by Instagram, which received 115.65 million impressions (+119%) while the AFC’s Facebook impressions rose by 80% to nearly 110 million.

The tournament also broke attendance records, several times. The peak was the 32,268 fans at the final between Uzbekistan and Saudi Arabia at the Pakhtakor Stadium. The tournament opened at the same stadium with Uzbekistan playing Turkmenistan in front of 28,670 fans.

The tournament saw 16 teams play 32 matches over 19 days across 32 matches in the cities of Tashkent and Qarshi. Saudi Arabia beat Uzbekistan 2-0 in the final. The Saudi completed their six games without conceding a goal.