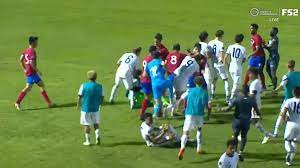 July 1 – A mass brawl after the USA’s 2-0 win over Costa Rica at the Concacaf U20 Championships in Honduras earlier this week has resulted in bans for nine Costa Ricans and one American.

The quarter final clash between the two nations had a lot on the line, with a semi-final spot and qualification for the 2023 FIFA U-20 World Cup in Indonesia going to the winner.

The US are chasing their third straight Concacaf U-20 Championship and went through to the semi-finals with two goals from Paxton Aaronson in the fifth and 49th minutes.

The Costa Ricans, who missed a penalty and hit the post, vented their frustration after the match confronting US players in a series of incidents and causing a mass fight to break out.

In their statement Concacaf said: “Having assessed all the evidence, the Committee has determined that the Costa Rican FA and a number of its players violated Competition Regulations and the FIFA Disciplinary Code.

“As a consequence of these rule breaches, and in accordance with the Competition Regulations, the Federation has been fined an undisclosed amount and the following players have been suspended for violent and unsportsmanlike conduct:

The US also had one player suspended, Cade Cowell, for “violent and unsportsmanlike conduct”.

It was a dark moment in a tournament that has sprung surprises, in particular the shock exit of Mexico at the hands of the Dominican Republic who qualify for their first ever FIFA finals tournament, and the re-emergence of Guatemala as a force on the Concacaf stage.

The US now face hosts Honduras in the semis. Dominican Republic and Guatemala are in the other semi-final.