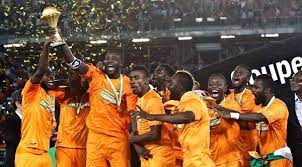 July 4 -The Africa Cup of Nations, seemingly buffeted constantly by logistical issues, has suffered another setback with next year’s tournament moved to 2024 and switched from June to January because of  likely adverse weather conditions.

The 34th edition of AFCON was originally scheduled for June and July 2023 in Ivory Coast. But for the second time in a row, the finals will have been moved from what was proposed to be a permanent summer slot in the calendar and instead take place in January and February – six months later.

Confederation of African Football president Patrice Motsepe confirmed the decision at the weekend, citing likely heavy rainfall in many parts of the country where the stadia will be located.

Ivory Coast has a tropical climate and June is the height of the rainy season. Severe flooding caused by very heavy rains killed at least five people in Abidjan, the capital, last month.

Which only begs the question, why was it scheduled for that period in the first place?

The move is bound to infuriate Europe’s top clubs who are packed with African stars but now risk losing many of them halfway through the season.

Speaking in the Moroccan capital Rabat, where a meeting of the CAF Executive Committee was taking place, Motsepe said: “We took a lot of advice and we decided we cannot take a risk. We don’t want to run the risk of that our top competition is going to be washed out. January is not the ideal time because of the European clubs, but it is the only choice we have.”

Motsepe did not answer a question about why it had taken so long for CAF to make the change, given it had been warned of the rainy season when the event was first slated for mid-2023. He merely said the choice had been made “out of courtesy” to Ivorian organisers.

Motsepe also confirmed the creation of an African Super League next season, to be formally launched on August 10.

He refused to give any details about the make up of the Gianni Infantino-backed tournament, which Motsepe insisted would not replace Africa’s existing Champions League.

“We are going to have a total revision of all club fixtures for all the competitions,” he said.