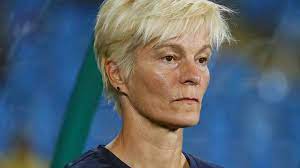 July 4 – Former Netherlands international and current Ireland coach Vera Pauw has revealed that she was sexually abused by three men employed within Dutch football when she was a player.

“For 35 years I have kept a secret from the world, from my family, from my team mates … and, I can now accept, from myself,” wrote Pauw in a statement published on Twitter.

“Even those closest to me have not known of the rape I endured at the hands of a prominent football official when I was a young player. Later two sexual assaults by other men were added to this record.”

Pauw said she turned to the police after five attempts to secure help from the Dutch Football Association, the KNVB, which had led to nothing.

“For the past number of years I have tried to have my case heard in a fair and just manner by the football authorities in the Netherlands but to no avail,” said Pauw. “I can no longer share the silence.”

Between 1984 and 1998, Pauw played 89 times for the Dutch national team as a defender. She was also the first female Dutch player to play professionally abroad when she joined Modena in Italy. After her playing days, she moved into coaching.

The KNVB however disputed Pauw’s version of events and claimed an independent investigation had been launched last year. “This investigation has shown that the KNVB should have done a number of things differently. Sadly, Vera in the past has been confronted with a number of errors of judgement and harmful remarks by [former] employees,” said the KNVB in a statement.

However, the governing body also said that during last year’s investigation, Pauw had indicated that she did not want to follow up on the allegations of sexual abuse. “We respected that choice. Our intention was to protect Vera,” said the  KNVB. “But we should have chosen a different path.”