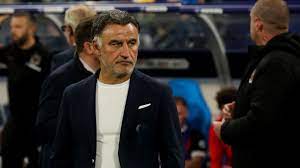 July 6 – It was the most open of secrets and now it’s official. Mauricio Pochettino’s reign at Paris Saint-Germain is over after Christophe Galtier was appointed the club’s seventh coach in 11 years.

Galtier was handed a two-year contract after arriving from Nice to replace Pochettino who failed like so many before him to land the Champions League title, the trophy Qatari-backed PSG crave more than any other.

PSG president Nasser al-Khelaifi presented Galtier at a news conference and said: “We have a new era to start, a new atmosphere, new objectives.”

Galtier said he felt “emotional” and “proud” to take charge. “We have to work in the right way to make people happy. I am fully aware of the responsibilities involved to coach this extraordinary team, which is one of the most competitive and spectacular squads in Europe.”

Galtier stated there will be no special favours for any of PSG’s star-studded squad that includes Neymar, Lionel Messi and Kylian Mbappe.

“Commitment, respect, and the team above all. If, unfortunately, players step away from that then they will be left out,” Galtier said. “Not one player will be above what a squad should be. I am a very demanding coach.”

“No one is above the club,” he said. “If a player doesn’t want to respect the rules in place then he has no place here.”

Pochettino had one year left on his contract but followed Thomas Tuchel, Unai Emery and Laurent Blanc in being fired by PSG since 2016.

Galtier led Lille to the French title in 2021 and joined Nice last season, finishing fifth and taking four points out of five against PSG whom Nice also knocked out of the French Cup.

Ultimately PSG’s inability to deal with pressure situations, especially on the European front, signalled the end for Pochettino just as it did for so many of his predecessors. It had been expected for weeks that he would be replaced.

Pochettino had arrived at PSG as one of Europe’s most coveted coaches after guiding Tottenham Hotspur to the Champions League final in 2019 and turning them into regular Champions League participants.

But he won only one trophy at cash-rich PSG, last season’s league title, and where he goes from here is anyone’s guess with most, if not all, of the top jobs in Europe already occupied.

Biding his time seems the most likely option.