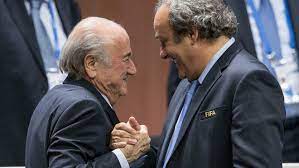 July 8 – Despite both being banned from the game by FIFA and following an investigation lasting seven years, Sepp Blatter and Michel Platini, once the two most powerful officials in world football, were dramatically acquitted today of fraud, embezzlement and other corruption charges in a criminal case brought by Swiss judicial authorities that gripped world football politics.

Blatter, who led FIFA for 17 years, and Platini, the one-time UEFA boss who courted and coveted Blatter’s job but never got it, were found not guilty of  defrauding FIFA, a hugely significant ruling in their respective bids to clear their names but a blow – not for the first time – to the Swiss judicial process and to FIFA.

The verdict followed an 11-day trial last month at the Federal Criminal Court of Switzerland in Bellinzona and centered around the so-called $2 million “disloyal payment” from FIFA to Platini with Blatter’s approval in 2011, for work done a decade earlier.

The case ended up bringing the careers of both men crashing down.  Both were banned by FIFA’s ethics committee because of the payment, removing Blatter, now 86, as FIFA president and ending Platini’s chances of succeeding his former mentor.

The infamous payment covered a “gentleman’s agreement” between the two for consultancy work by Platini when the Frenchman was working as a presidential adviser in Blatter’s first term, from 1998-2002.

The timing of its approval was hugely significant, coming just a few months before Blatter was re-elected to the FIFA presidency in 2011 when he stood unopposed. Prosecutors believed the two defendants lied as to the reason for the payment arguing it was “without legal basis” and unlawfully enriched Platini.

But Both Blatter and Platini have long claimed they did absolutely nothing wrong and that the money represented backdated salary even though there was apparently no written contract.

The pair’s defence that everything was above board may have failed both at the FIFA ethics committee and later in separate appeals at the Court of Arbitration for Sport, even though Platini’s ban was reduced, but now their reputations have in part been restored.  Swiss prosecutor Thomas Hildbrand had requested a 20-month suspended jail term for both men.

“Following the decision of the judges of the Court of Bellinzona, this morning, I wanted to express my happiness for all my loved ones that justice has finally been done after seven years of lies and manipulation,” said a defiant Platini after the judgement. “The truth has come to light during this trial.”

Hinting of further legal action, he added: “I kept saying it: my fight is a fight against injustice. I won a first game. In this case, there are culprits who did not appear during this trial. Let them count on me, we will meet again. Because I will not give up and I will go all the way in my quest for truth.”

“Believe me, going from being a legend of world soccer to a devil is very difficult, especially when it comes to you in a totally unfair way.”

Platini’s FIFA ban expired in October 2021 and today’s verdict should clear the way for the one-time French international superstar  to return to football administration.

Platini did not identify the so-called culprits but one of those he referred to was most likely current FIFA president Gianni Infantino who used to be the Frenchman’s number two at UEFA.  Platini has long alleged that there was a conspiracy to stop him taking over from Blatter. Last year he filed a criminal complaint against Infantino and others in France.

Infantino is still under criminal investigation by Swiss prosecutors over a series of undocumented meetings he held with the Swiss Attorney General’s office and whether he altered the course of investigations and justice in the country.

As for Blatter, although he too has had a dark cloud lifted by today’s judgement, at 86 and in ill-health he is unlikely ever to return to the game, not least because last year he was banned for a second time by FIFA judges for alleged financial wrongdoing.