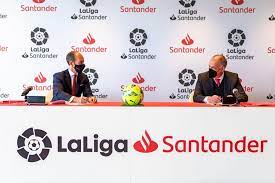 July 12 – Banco Santander will end its title sponsorship of Spain’s LaLiga at the end of the 2022/23 season, with the two parties saying that they will instead “explore new ways of collaboration”.

In April 2021 Santander renewed its deal with LaLiga for a further two years, with the option to extend for a further year until 2023-24. The sponsorship, covering LaLiga Santander and the second tier LaLiga SmartBank, first began in 2016.

LaLiga said that the decision to change the sponsorship arrangement between the two partieswas “the result of a joint decision by both organisations to explore new ways of collaboration, both together and with third parties.”

LaLiga said it will announce new developments regarding naming rights from the 2023/24season in the coming weeks.

LaLiga president Javier Tebas said: “We thank you for the trust you have placed in LaLigaover the years, and we are convinced that we will continue to collaborate on future projectswith Banco Santander in order to grow and promote both brands.”

Santander has made education a key part of its sponsorship, helping to create LaLigaProPlayer and to promote university education and in the creation of sports scholarships in the, as well as the creation of an educational programme for active professional footballers in 2021. LaLiga Business School’s Global Players Program was the first of its kind among majorEuropean leagues and was attended by 30 players in its first edition.

Santander’s sponsorship also crossed into support for eLaLiga, as well as the Santander Football Quiz, an application jointly developed to entertain, test and reward fans.

Antonio Simões, Regional Head of Europe and CEO of Santander Spain, added: “We aredelighted with our partnership with LaLiga over the years and are keen to explore furtheravenues of collaboration.”