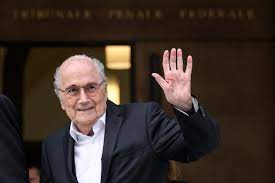 July 12 – It has been a good few days for former FIFA president Sepp Blatter, who on Friday was acquitted of fraud charges over the CHF2 million payment by FIFA to Michel Platini and has now reportedly had a criminal investigation against him over the award of a World Cup television contract to former Concacaf president Jack Warner dropped by the Swiss public prosecutor’s office.

Le Monde quotes a prosecutor’s office statement saying: “We confirm that the MPC has communicated to the parties that it considers the criminal investigation to be complete and ready to be closed and that it intends to close the procedure concerning this set of facts.”

The case concerns a $1 million loan FIFA made to the Trinidad & Tobago Football Federation (TTFA) which was at the time chaired by Warner.  In another case, the Caribbean Football Union (CFU), controlled by Warner as well at the time, acquired broadcast rights to the 2010 and 2014 World Cups for $600,000. Warner then sub-licensed the right to his own Cayman Islands-registered company J & D International (JDI) which sold them on to SportsMax in Jamaica for almost $20 million.

Warner has long since fallen from grace and is fighting extradition to the United States from Trinidad & Tobago having been indicted in the FIFAGate case. He was once a long-time ally of Blatter.

Last week, the 86-year-old Blatter was cleared of corruption by a court in Bellinzona. In a statement, the court said that “the result of the evidence supports the version of the accused, the facts of the indictment cannot, therefore, be considered to have been created with a probability bordering on certainty and the court adheres to the version the prosecution’s serious doubts remain.”