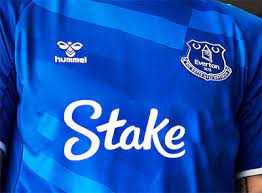 July 15 – Over 20,000 Everton fans have signed a petition calling on the club to drop its crypto casino betting sponsor.

Everton announced a “record” deal with online casino Stake.com  a few weeks ago which will see the company’s  logos  appear on men’s and women’s team shirts.

However, amid general concern over gambling in football especially by players who get into serious debt and even become suicidal, the deal has caused a widespread backlash after Everton allegedly previously said betting sponsors were “not ideal” but were needed when considering commercial options.

Everton have posted significant losses in recent seasons and while online betting sponsorship have been important revenue streams for clubs, the government is currently reviewing gambling advertising regulation with the Premier League having separately asked clubs to agree a phasing out of betting sponsors on club shirts.

The petition against Everton’s partnership with Stake.com, was launched by season ticket holder Ben Melvin, who is reported to have lost hundreds of thousands of pounds gambling over the course of a decade.

“Everton are the People’s Club. It is a club that cares deeply for the people, and its supporters. Everton, over the years, have constantly set very high standards and trends for others to follow. We have to maintain these high standards,” he was quoted as saying.

Meanwhile Everton fans group, 27yearscampaign, have issued an open letter to owner Farhad Moshiri after he insisted that he is not putting the club up for sale.

Supporters have expressed their unhappiness with Moshiri after years of mediocrity, poor transfer business and last season’s relegation battle. Moshiri, however, is adamant Everton are not for sale and said he is only seeking additional investment into a club that has recorded losses of more than £370 million in the past three financial years.