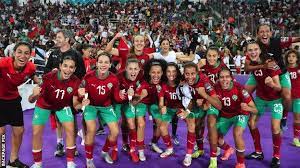 July 19 – Africa will crown a new champion after Morocco and South Africa reached the final of the 2022 Women’s Africa Cup of Nations.

The hosts defeated nine-woman Nigeria 5-4 on penalties following a 1-1 draw. The Super Falcons took the lead through an own goal from Yasmine Mrabet before Sanaa Mssoudy equalised. The reigning champions had both Halimatu Ayinde and Rasheedat Ajibade sent off.

The match also set an attendance record in the Women’s Africa Cup of Nations with 45,562 fans watching the semi-final at the Moulay Abdallah Stadium in Rabat.

It’s the first time that Morocco (pictured) have reached the final of the continental championship. That’s not the case for South Africa, who have been runners-up in the tournament four times. In the 2018 edition of the tournament, South Africa were defeated by Nigeria in the final. This time they could go one better after defeating Zambia 1-0 courtesy of a 94th-minute penalty goal from Linda Mothalo.

There was however controversy over the referee’s decision to award the spot kick following a pitch-side VAR review. Zambia coach Bruce Mwape expressed his disappointment over the decision.

In the South African camp, there was nothing but joy. “In 2018, we got so close, and then there was no competition in 2020 (due to Covid-19),” said Banyana Banyana coach Desiree Ellis.

“Before we started our camp, we sat down as a group and said, what is our aim? What is our objective?

“The first was to qualify for the World Cup. The second was to win the final, and I think we have to give ourselves this chance after coming so close in 2018. It is not just for us. It’s also for the players that were there in 2018.”

On Saturday, the South Africans and Moroccans will meet in the final to crown a new African champion.