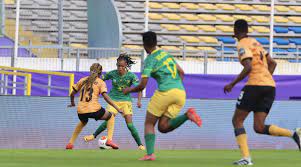 July 20 – Zambia’s football association (FAZ) has requested a replay of its Women’s Africa Cup of Nations semi-final against South Africa after lodging a complaint about the match official in charge.

Zambia’s women were knocked out on Monday night, after Banyana Banyana beat them 1-0.

The game’s solitary goal came in the 94th minute, after a highly contentious penalty was awarded to the six-time competition finalists but the Zambians felt aggrieved about the officiating

“The Football Association of Zambia (FAZ) wishes to inform its stakeholders and football family that it has lodged a formal complaint to the Confederation of African Football (CAF) against the officiating exhibited by Ethiopian referee Lidya Tafesse Abebe during the 2022 TotalEnergies Women’s Africa Cup of Nations (WAFCON) semi-final match between Zambia and South Africa,” an official statement from FAZ reads.

“We therefore wish to contest against the decision of the referee to award such a penalty resulting in a goal which decided against our team progressing to the finals as we call for a serious review of the game.

“We call for the penalty to be cancelled, that a replay be ordered and that the referee be barred from handling any games.

“We have further noted with great concern the poor officiating that characterised the tournament specifically our games. We recorded similar incidents of poor match officiating by referees who have gone scot-free among them referee Bouchra Karboubi who has continued to handle games at the tournament as if nothing happened.”