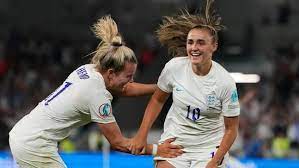 July 21 – On a nail-biting, nerve-wracking night, host nation England – watched by a sold-out Amex stadium and 7.6 million viewers at home – edged into the semi-finals of the Women’s Euros on Wednesday after dramatically coming from behind to beat fellow pre-tournament favourites Spain in extra time.

Georgia Stanway unleashed a stunning screamer to earn the hosts a 2-1 win despite being second best for large periods of the game.

England, who thrashed Norway 8-0 during the group stage, were facing an ignominious exit from the tournament with six minutes of normal time remaining but went on to earn a semi-final clash with Belgium or Sweden.

Spain grabbed a 54th-minute lead through Esther Gonzalez, reward for their one-touch passing, clever tactics and technical ability.  But with time running out, the Lionesses levelled through substitute Ella Toone before Stanway’s 20-yard piledriver in the 95th minute, sending the crowd at Brighton’s Amex Stadium into delirium.

Spain continued to threaten until the final whistle but couldn’t breach England’s defence as the hosts ensured they reached a fourth successive women’s major tournament semi-finals and extended their unbeaten run under Sarina Wiegman to 18 matches.

England’s renowned strength in depth was the deciding factor, with Wiegman, who had only just recovered from a bout of Covid, showing tactical nous by taking off  leading scorer Ellen White, Euro 2022 top scorer Mead and playmaker Fran Kirby at the time Spain were in complete control.

“The whole game was a test. The level of this game was so high. I haven’t experienced that too much,” Wiegmann said.

“We used Plan B. We scored quickly after doing that so we could go back into our normal shape. I’m so proud of the team. The fans behind us, you could feel it. I came with the team late, prepared, tried to stay calm. I won’t forget this day.”