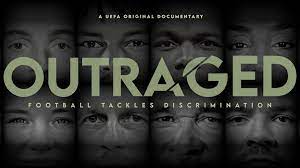 July 21 – UEFA has released the five-episode Outraged documentary series on its UEFA.tv platform as part of its ongoing fight against discrimination, hate and online abuse in football.

Next season UEFA will use the Outraged series as part of a European-wide educational project within its federations to emphasise the value of respect, prevention of discrimination of all kinds and encouragement of equality and inclusion.

The project focuses on children and youth, and will also engage coaches and schools and work with broadcasters to reach a wider audience.

The last episode in the series addresses online abuse, in conjunction with the Real Scars campaign that was launched at UEFA Women’s EURO 2022. Wendie Renard, Jorginho, Alisha Lehmann, Karen Carney, Kai Havertz and Patrick Vieira share their experiences and opinions.

Michele Uva, UEFA’s Director of Football and Social Responsibility, said: “The Outraged documentary has reached millions of people around the world with the important message of working together to eliminate all forms of discrimination and racism in football. To engage and educate an even larger audience, we have released this documentary series featuring short episodes surrounding human rights topics in football.

“With the Outraged series, UEFA will work even closer with all of its member associations to help educate players in their national youth teams and academies, coaching courses, professional clubs and clubs at the grassroots level, and schools throughout Europe,” he continued.