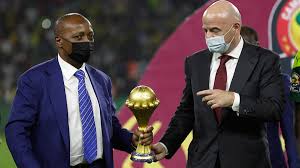 July 25 – Confederation of African Football (CAF) president Patrice Motsepe has rubbished the persistent perception that he is a puppet of FIFA boss Gianni Infantino, telling media it as an “old story”.

On the eve of the Women’s Africa Cup of Nations final in Morocco, Motsepe dismissed the notion that FIFA influences him or that the world federation has colonised CAF.

At a news conference, he said: “One of the things I like about Infantino is that there are so many things we agree on and so many we disagree on. I look at things more commercially. He has got much more experience than I do on the policies of football and more often than not he is correct.”

“I want to assure you – look at Infantino’s track record before I became president. He did good, good work for Africa. The problem is he supported the biennial World Cup. We were caught up in this issue about Infantino’s differences with different parts of the World. From an African perspective, a World Cup every two years is good, but the World Cup s not only about Africa, it is about the world.”

CAF was the first confederation to endorse Zurich’s biennial revolution, which ultimately failed to garner any traction.

CAF boss Motsepe has long been believed to be a close ally of Infantino, whose help was fundamental in getting the South African billionaire elected by acclamation in the confederation’s presidential elections in 2021.

On the eve of the vote and in the midst of a pandemic, Infantino jetted around Africa, raising suspicions that he unduly influenced the electoral process.