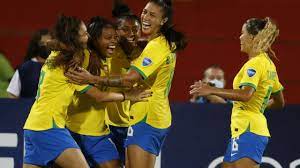 July 27 – Brazil and Colombia have qualified for the 2023 Women’s World Cup and the Women’s football tournament at the 2024 Olympic Games in Paris after reaching the final of the Copa America.

The defending champions defeated Paraguay 2-0 in their semi-final courtesy of first-half goals from Ary Borges and Bia Zaneratto. The Brazilians remain undefeated in the tournament and have not conceded a goal.

They will be strong favourites to retain their title on Saturday against Copa America hosts Colombia who overcame Argentina in their last-four match, 1-0.

“Those were the objectives, I am very happy to achieve them and the first thing I will do is put together the calendar to prepare for the World Cup and the Olympic Games,” said Brazil coach Pia Sunhage, who added that Colombia will be a difficult opponent in the final.

The winners of the third-place playoff between Argentina and Paraguay will also claim a ticket to the World Cup.