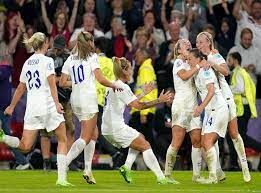 July 27 – Having fallen at the same stage in their previous three major competitions, England’s Lionesses overcame their semifinal jinx by roaring into the final of Euro 22 with a crushing 4-0 win over Sweden on Tuesday, a scoreline that sent shockwaves across the women’s game.

Sarina Wiegman’s jubilant side will face either eight-time champions Germany or European semi-final debutants France, who meet tonight, in Sunday’s sold-out final at Wembley after a remarkable display against the world’s second-ranked nation.

Despite a nervous start during which they were indebted to goalkeeper Mary Earps and their own crossbar, the hosts rose to the occasion in arguably the biggest game in the history of the English women’s national side – bigger perhaps than reaching the final of both the 1984 and 2009 Euros given the recent investment in the sport and the expectant millions watching on television.

Olympics finalists Sweden, unbeaten in 34 games going into the game, had never lost a Euro match by more than two goals but England’s second-half display blew Peter Gerhardsson’s side away amidst a cauldron of noise at Sheffield United’s Bramall Lane stadium, prompting wild celebrations across the nation.

Under their Dutch coach, England’s women now have the chance to go one better than the men who lost to Italy last year in the final of the delayed Euro 2020.

Wiegman said the “historic” win, the 17th of her 19 matches in charge since taking charge of the team last September, would reverberate around the world. She  has now reached a third straight major-tournament final – having led her own country to glory at Euro 2017 and reached the final of the 2019 World Cup.

“This result will go all over Europe and the world. It was such a performance that tomorrow everyone will talk about us,” she said. “We said before we started the tournament that we want to inspire a nation – I think that’s what we’re doing.

“I’m very proud. Again, the team found a way. We didn’t start that well. But during the first half, we did a little better and better and the players on the pitch found solutions. The first half we struggled but the second half we played so much better. “

Sweden’s veteran goalkeeper Hedvig Lindahl, so often their heroine in the past, was  arguably at fault for two of the goals but ultimately England, as against Spain in the quarterfinals, had the necessary ruthlessless, strength in depth and finishing to overcome a slow start and dismantle the opposition.

While Beth Mead’s brilliant opening goal was all about technique and balance, super-sub Alessia Russo’s audacious, instinctive backheel for England’s third is sure to be replayed constantly in the buildup to the final – and beyond.

After a chastening evening for his team,  Gerhardsson bemoaned: “In the first 25 mins, I thought we had enough chances, the most dangerous chances to score. Goals are really important. The greater the opponent, the more important the chances. It would’ve given the game a different outlook.”