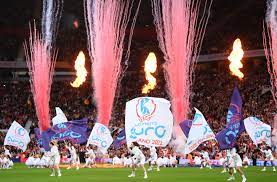 That figure breaks the record set at the men’s final in 1964 between Spain and the Soviet Union, which was played in front of 79,115 spectators at the Estadio Santiago Bernabéu in Madrid.

UEFA has released a set of record breaking attendance stats for the Euros which, even before the final, have seen the overall tournament attendance record of 240,055 set at Women’s Euro 2017 in the Netherlands been more than doubled, with the two semi-finals bringing the total attendance at the tournament to 487,683.

UEFA said nearly 100,000 children have been part of that attendance while 47% of all fans in the stadiums have been female, with a similar fan demographic anticipated for the final.

“Tens of thousands of international fans have travelled to England, bringing a festive atmosphere to the nine host cities,” said UEFA.

For the first time the Euro Women’s final will have a pre-match show with BRIT Award-winning singer-songwriter Becky Hill headlining – presented, of course, by Pepsi MAX – a set that “will celebrate female strength, power and achievement, both on and off the pitch”, said UEFA.

Nadine Kessler, UEFA chief of women’s football and Women’s EURO 2013 winner (with Germany), said: “Whoever comes out on top, England against Germany at the iconic Wembley Stadium will be one for the history books and an unforgettable event for a whole generation. For all the lucky ones who have a ticket for the final, we are looking forward to seeing you at Wembley, breaking another attendance record and supporting your team!”