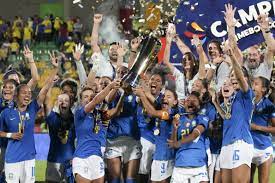 August 1 – Brazil have retained their continental crown, defeating hosts Colombia 1-0 in Bucaramanga in the final of the Women’s Copa America with a penalty kick from Debinha.

The defending champions had been the sky-high favourites to win the competition and they delivered emphatically, going unbeaten in the tournament, scoring 20 times without conceding a goal.

“It wasn’t the beautiful game, but it was efficient,” said Brazil’s Swedish coach Pia Sundhage. “Colombia also didn’t have great chances and we kept a clean sheet, I think we were the better team.”

The Brazilians have won every edition of the Copa America with the exception of 2006 when Argentina prevailed on home soil. This was Brazil’s fourth title in a row and eighth in nine editions. It is the third time that Colombia have finished as runners-up in the last four tournaments.

Brazil and Colombia as finalists qualified to represent South America in the women’s football tournament at the 2024 Olympic Games. They also qualified for the 2023 Women’s Cup in Australia and New Zealand.

They will be joined by Argentina, who defeated Paraguay 3-1 in the third-place playoff. The Paraguayans can still clinch a ticket for the finals through the intercontinental playoff route.