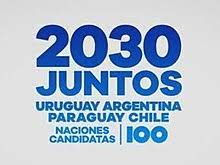 August 1 – Argentina, Chile, Uruguay and Paraguay have met to finalise their official bid for the 2030 World Cup, the centenary edition of the competition.

The four countries are due to provide details this week and will compete against the joint candidacy of Spain and Portugal – and potentially a couple of other candidates.

If the South Americans win, it will be the first time that the World Cup will take place in four different countries. FIFA are due to make their decision in 2024.

Hosting the 2030 edition would be particularly symbolic for Uruguay, which organised the very first World Cup in 1930.Argentina staged the tournament in 1978 and  Chile in 1962 but Paraguay have never been hosts to date.