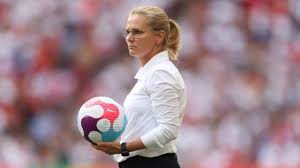 August 2 – The English FA are planning contract talks with head coach Sarina Wiegman after she guided the country to Euro 2022 glory on Sunday in her first tournament in charge of the Lionesses.

Wiegman only took the job in September but within the space of 10 months ended the country’s wait for a major trophy in women’s football and the first since the 1966 men’s World Cup.

The contract of the 52-year-old Dutch woman, the first coach ever to win back-to-back women’s Euros having achieved the same feat with the Netherlands, expires in 2025 following that summer’s European Championship.

“She will have a couple of weeks off. When she gets back, we’ll have a conversation,” said Baroness Sue Campbell, the FA’s head of women’s football.  “She’s done an incredible job.”

“You have to remember she only came in in September and everybody said to me: ‘Do you think she can win the Euros?’ And I said: ‘It’s a very short time span that.’

“You have to be in it to feel it. There’s no people sitting on the edge, there’s nobody outside the bubble. They’re all in this together and she’s uncompromising on that front.

FA chief executive Mark Bullingham said Wiegman was their “number one target” last year and he hopes she is with England for “a long time”.

“We were delighted to secure her, even though in our wildest dreams, we thought that this tournament might be too early,” Bullingham revealed.

“We weren’t sure we’d win this one. We were hoping we would win one in the future, so she achieved brilliant results earlier than we could have ever hoped.”