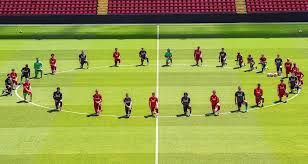 August 2 – The captains of English Premier League teams are in talks with their teams over whether to continue taking the knee when the new season gets under way later this week.

Since the restart of the 2020-21 campaign, players have supported the anti-racism stance as a direct response to the Black Lives Matter movement.

But reports suggest there is a growing feeling that despite the pro-equality campaign remaining as strong as ever, taking the knee has lost its meaning. A firm decision could be made before Friday when Arsenal visit Crystal Palace in the first fixture of the new season.

One idea is apparently to only take the knee before ‘selected’ matches, possibly those being televised.

Newly-promoted Bournemouth are one club reported to have decided that taking the knee is not having the same effect as in the past.

As the new season approaches, there are also concerns about the rise in incidents involving fans bringing flares and smoke bombs into stadiums – a regular occurrence in continental Europe.

Flares were let off during the annual Community Shield fixture between Manchester City and Liverpool on Saturday and as part of a new clampdown, there will be searches outside stadiums.

“This is absolutely vital,” said Premier League chief executive Richard Masters. “We saw some quite serious incidents across the game at the end of last season. We need to stop that and push it back to make sure it doesn’t get out of control.”