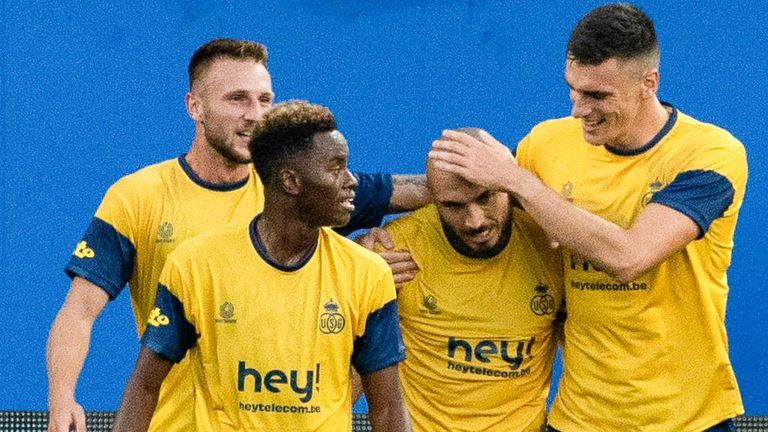 Leuven – On a raucous night at Den Dreef, Belgium’s Union Saint-Gilloise upset Glasgow Rangers 2-0 in the third round of Champions League qualifying, with Teddy Teuma and Dante Vanzeir getting the goals either side of the half.

Months after losing the Europa League final against Eintracht Frankfurt, Glasgow Rangers’ new European campaign got off on a false note.

Against Union, Rangers were insipid, failing to generate any momentum and they were punished by the hosts when Teddy Teuma (pictured second right), Union’s standout player together with Lazare Amani, smashed in the opening goal in the 27th minute, beating goalkeeper Jon McLaughlin a bit too easily.

On the touchline, Giovanni van Bronckhorst, who succeeded Steven Gerrard last November, looked a touch worried. Last season, the Glasgow outfit exited the Champions League in the preliminaries losing at the hands of Sweden’s Malmo.  After the break, the Scottish team hardly improved, struggling to string a coherent attack together.

Union pressed their advantage against a limited Rangers, displaying many of the virtues that made last season unforgettable, playing the same 3-5-2 of departed coach Felice Mazzu.

In the 72nd minute, Simon Adingra forced McLaughlin into a smart save at his near post before the Rangers keeper denied Vanzeir. Minutes later he scored Union’s second minutes later from the penalty spot after Connor Goldson handled the ball in the penalty box. It was a harsh call from the referee, but Union’s lead was well deserved.

In a frantic finale, the diminutive striker, so instrumental to Union’s domestic campaign last season, should have got a third when clean through on goal.

Rangers then have it all to do next week at Ibrox if they want to return to the Champions League for the first time since the 2010/11 season. The winners of the tie will meet PSV Eindhoven or Monaco in the play-off round. The Dutch got a 1-1 draw away to the Stade Louis II.