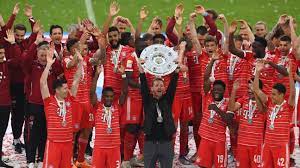 With five Champions League participants from the Bundesliga for the first time ever this season, Bayern will still be favoured to claim their 11th straight domestic title.

While Lewandowski, who scored 344 goals in 375 games in all competitions during eight years at the Allianz Arena, will be missed up front, Bayern CEO Oliver Kahn believes the acquisition of Mane could work in the German champions’ favour by making Bayern less predictable in attack.

“You could see how many opportunities we had going forward, how many different formations we had, how surprising we can be,” Kahn said in the aftermath of Bayern’s 5-3 Super Cup victory over RB Leipzig last weekend.

The Bundesliga’s top defence from last season, Bayern have also been bolstered with the addition of 23-year-old Dutchman Matthijs de Ligt from Juventus, considered one of the best centre backs in the world.

After conceding 52 goals last time out, more than any other side in the top eight, Dortmund loosened the purse strings to bring in German national team centre-backs Nico Schlotterbeck and Niklas Suele from Freiburg and Bayern respectively.

New sporting director Sebastian Kehl nevertheless appealed to fans to show “a little realism” in pursuit of their first title since 2012.

“Bayern make €285 million ($291 million) more in revenue than we do. Roughly speaking, they will invest twice as much in their squad this season as we have,” he said.

Leipzig enter the season having won their first major title, beating SC Freiburg on penalties to lift the 2021/22 German Cup. They’ve also managed to hold on to their best players, in particular German Footballer of the Year Christopher Nkunku who signed a two-year contract extension in June.