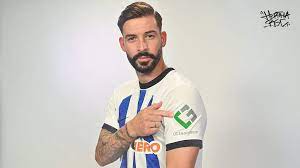 The three-season partnership will run until 30 June 2025 and will see the Berlin-based real estate developer have a package of advertising rights as well as the sleeve position and including space on the two pitchside LED boards.

CG Elementum was already a partner of Hertha Berlin but the move to take the sleeve sponsorship is a significant upgrade of their relationship with the club.

“As a company based in Berlin, we want to make our mark. We were delighted that our logo will be on the left sleeve of Hertha’s first-team shirts,” said Christoph Gröner, chairman of CG Elementum.

“This partnership underlines our long-term connection with Hertha BSC and how much we respect the club, its fans and all the staff members.”

Thorben Jeß, Vice President of Team Hertha BSC at SPORTFIVE, who negotiated the deal, said: “Starting the new season with CG Elementum as our sleeve sponsor and exclusive partner is a great sign. We are really pleased that we have been able to take our cooperation with a long-term partner to the next level.”