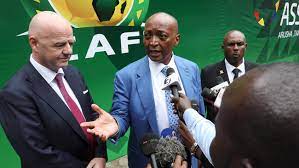 August 10 – The African Super League has been launched – well, almost. CAF president Patrice Motsepe offered few details at a ‘soft launch’ of the new competition but repeatedly failed to address the elephant in the room: with CAF on the verge of bankruptcy, how will the Super League be financed ahead of its supposed kick off in August 2023.

In Tanzania, Motsepe, a South African billionaire whose rise in the world of football  administration has been meteoric since he was elected CAF president in 2021, watered down what should have been the formal launch of the controversial competition to a ‘soft launch’.

FIFA president Gianni Infantino, who has been looking for a Super League somewhere in the world to feed into his delayed plans for an expanded Club World Cup, called the launch “a historic moment”.

He presented financial numbers that had been previously leaked: each of the 24 participating clubs (from 16 countries) will receive a minimum of $2.5 million and the winner of the new competition will get at least $10 million. Each of CAF’s 54 member associations will receive $1 million. On top of that, there will be a $50 million development fund.

But Motsepe was unconvincing as to where the money for the Super League and his financial promises would come from.

He spoke of “a huge amount of interest and enthusiasm in this project from private investors” but remained extraordinarily light on detail in another rambling speech and that failed to address the fundamental issue of who will underwrite CAF’s new fanciful competition?

“The African Super League is the most important and most effective and most fundamental intervention and contributor to the significant uplifting of the quality of African football,” said Motsepe.

But there was no detail on funding, where there would be commercial support from broadcasters and sponsors and crucially, how it will impact the Champions League. At this stage, the commercial viability of the Super League remains in doubt, even more so against the backdrop of deeply troubled CAF finances.

CAF’s financial crisis was accelerated by the termination of the contract with French agency group Lagardere in 2019. Lagardere is now seeking compensation of up to $100 million from CAF, a claim that could ransack CAF’s finances further. The dispute has also left the confederation as something of a pariah when trying to engage with new sponsors.