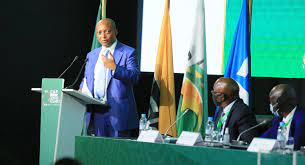 August 10 – Delivering a public relations boost to Gianni Infantino’s re-election expectations, Confederation of African Football (CAF) president Patrice Motsepe has vowed that all of the continent’s 54 votes will go to the incumbent in FIFA’s presidential elections next year.

Running unopposed at the moment, Infantino had already enjoyed public backing from COSAFA and the South Sudan Football Association (SSFA) for his re-election, but on Wednesday Motsepe pledged that the entire continent would back the FIFA president as he seeks another term in 2023.

Motsepe’s declaration at the CAF Congress received a lukewarm reception from the floor where Africa’s member associations are becoming increasingly sceptical of Motsepe’s leadership and FIFA’s dominance of the confederation.

The meeting of Africa’s top football officials at the foot of Mount Kilimanjaro has been tumultuous with growing unease in the ranks over how Motsepe and FIFA are running CAF. In his speech, Infantino said that “CAF is FIFA and FIFA is CAF”.

A South African billionaire and mining magnate, Motsepe has long been seen as a close ally of Infantino. In 2021, he came to power with the support of the FIFA president, despite the world federation’s duty of neutrality. All four other candidates running for election stood down.

But Motsepe is increasingly coming under pressure from African FA presidents and other stakeholders in the African game, with CAF teetering on the edge of bankruptcy and the leadership’s grandiose vision of an African Super League, backed by FIFA, failing to supply any real detail or ignite enthusiasm.

At the FIFA Congress in Doha in March, Infantino announced that he would stand for re-election in 2023. So far, no other candidates have come forward to challenge Infantino, who was elected president of FIFA in 2016 before being re-elected in 2019.