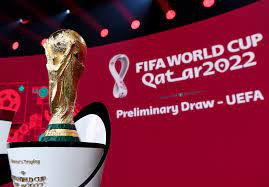 August 12 – The start of the Qatar World Cup, just three months away, is to be brought forward by 24 hours to give the host nation centre stage. FIFA has now made the date change official

The finals were due start on Monday November 21 with a four-match opening day beginning with the Group A game between Holland and Senegal followed by England vs Iran in Group B.

The third game would have been a second Group A clash between Qatar and Ecuador. The Group B match USA vs Wales would have closed out the day.

But suddenly that script has been ripped up, in the process stretching the finals from 28 to 29 days – right in the middle of the European season.

You could be forgiven for questioning why FIFA appears to be making allowances for Qatar compared with previous hosts.

Not only will the finals controversially and uniquely take place in the middle of winter but with the tournament so close, FIFA’s top brass have signed off allowing Qatar’s team to be given top billing by taking on Ecuador in an exclusive Sunday evening slot with a global television audience.

Let’s be clear. Since the 2006 tournament in Germany, it has become traditional that the host nation plays in the opening game.

That’s not the issue. The issue, somewhat bafflingly, is why it has taken so long for the powers that be to recognise their blunder and only now change the entire opening day schedule which could also impact ticket holders.

FIFA president Gianni Infantino and the leaders of the six regional confederations – known collectively as the FIFA Bureau – were the people who gave the green light to shift the opening so that Qatar could enjoy stand-alone exposure on November 20.

Now what will happen is that Senegal-Netherlands will kick off later in the originally scheduled November 21 slot.

“The FIFA World Cup 2022 will kick off with an even greater celebration for local and international fans as host country Qatar will now play Ecuador on Sunday, 20 November at 19:00 as part of a stand-alone event,” a FIFA statement explained.

“The opening match and ceremony of this year’s tournament at Al Bayt Stadium have been brought forward one day following a unanimous decision taken by the Bureau of the FIFA Council today. Consequently, the encounter between Senegal and the Netherlands has been rescheduled from 13:00 to 19:00 on Monday, 21 November.”

“The change ensures the continuity of a long-standing tradition of marking the start of the FIFA World Cup with an opening ceremony on the occasion of the first match featuring either the hosts or the defending champions.

“The decision followed an assessment of the competition and operational implications, as well as a thorough consultation process and an agreement with key stakeholders and the host country.

“FIFA will seek to address any issues arising from this change in a case-by-case basis,” continued the statement relating to fans whose travel plans are affected.

But, it added tellingly, the risk to fans “is sufficiently outweighed by the value and benefits of the proposal” commercially. Surprise, surprise.

This may not actually be the final twist either. It is still unclear whether Ecuador will even be allowed to play. Chile are not giving up in their determination to have Ecuador thrown out of the competition for fielding an ineligible player against them during the South American qualifying campaign.

It’s another headache, some of their own making, that the organisers and FIFA could do without in a World Cup that will be like no other – in so many ways.