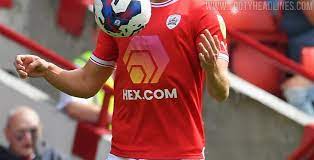 The club, who were relegated to England’s third tier at the end of last season, said: “Barnsley Football Club value our fans and our core beliefs above everything else. Following recent events and a subsequent investigation, the Club has assessed its relationship with its front of shirt sponsor and has taken steps to end that relationship with immediate effect. The Hex.com logo will not appear on the team’s kits going forward.”

The partnership between the League One club and the cryptocurrency company was short-lived.

The deal was only announced last week, but social media accounts of individuals credited by HEX’s Brent Morrissey with brokering the deal appeared to previously have made homophobic comments. The clubs’ fans protested and Barnsley began an investigation.

Supporters also raised serious integrity questions about the sponsorship, with allegations that Hex is a Ponzi scheme. In a written statement the supporters club asked four questions following talks with the club:

“2. What due diligence was taken regarding the history of the company? Focusing on the numerous online claims that this is a Ponzi scheme, or a hoax, and the risk that supporters might invest their own funds in something that is tipped to fail?

“3. The online HEX community are extremely active, to the detriment of the online experience for our own supporters. Whilst the club can’t do anything to stop people interacting online, is this a behaviour the club want to be associated with given its negative effect on the fan base?

“4. Linked to question one, some individuals are claiming they brokered the deal to sponsor the football club rather than Richard Heart the founder of HEX. These individuals have questionable views and opinions that none of us would want associated with the football club. How can we distance ourselves from these people and views if we continue with HEX as our main shirt sponsor?”