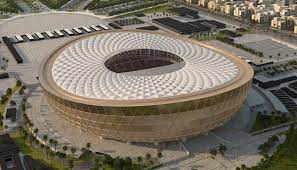 August 12 – On the eve of the 100-day countdown to the World Cup, Al Arabi defeated Al Rayan 2-1 in the first test event at the Lusail Stadium, the 80,000-capacity venue for the World Cup final, and the last of Qatar’s World Cup stadia to be completed.

The local derby drew in around 20,000 supporters with only a limited part of the stadium operational.

“The atmosphere was great in this superb World Cup stadium and I am very happy to win an important match at this venue,” said Al Arabi coach Younes Ali.

On September 9, the Saudi Pro League champions and Egyptian Premier League winners will feature in the next major test event at the stadium, with operations and capacity expected to be increased.

North of Doha, the stadium, inspired by the fanar lantern and with a golden façade, will stage World Cup matches at every stage of the competition, starting with the Group C clash between Argentina and Saudi Arabia on November 22. Five-time world champions Brazil will also kick off their World Cup campaign at the venue when they take on Serbia in Group G. Both South American teams will play twice at the venue in the group stages.

One of eight stadiums that Qatar will use to host the global finals, the Lusail Stadium will be the centre-stage venue of the finals. It will host the final on December 18, Qatar’s national day.

The opening game, however, will be staged at the Al Bayt Stadium in Al Khor. On Thursday, FIFA confirmed that Qatar – Ecuador will kick off the tournament, advancing the opening match by a day.