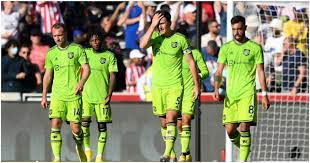 August 15 – Manchester United came in for heavy criticism from pundits and former players after they crashed to a 4-0 defeat at unheralded Brentford in the Premier League on Saturday, their second loss in as many league games under new boss Erik ten Hag.

The result left United bottom of the table as Ten Hag became the first manager since 1921 to lose his opening two games in charge of the club.

Brentford scored four goals within 35 minutes in the first half against a woeful United side, who have now lost seven straight games on the road stretching back to last season

Former United defender Gary Neville, who has been critical of the owners, the Glazer family, said he was witnessing the “annihilation of the club”.

“I thought United would do better but they have been mauled, bullied, messed about with like you wouldn’t believe, and there’s nowhere to hide,” he told Sky. “I have been watching United for 42 years and I can’t think of a moment when I have thought things have been as bad as that in the first half.”

The Sunday Times newspaper went with the headline “Rock bottom” and it doesn’t get much easier for United who host Liverpool next Monday.

Ten Hag, brought in to turn around United’s fortunes after their sixth-place finish last term, said of the chastening defeat: “What I asked them to do was play with belief and take responsibility for their performance. That is what they didn’t do.”

“Of course, you expect a different start. It is not what we expected … It seems like what happened in the past, last season, we bring into the new season. We have to change that really quickly.”

Meanwhile the managers of Chelsea and Tottenham Hotspur, Thomas Tuchel and Antinio Conte, were both sent off after clashing at the end of a fiery 2-2 draw on Sunday in which Spurs equalised for the second time in injury time.